Miss Lemon is not entirely sure it's fair to saddle  The Blank Wall, by Elisabeth Sanxay Holding, with the Forgotten Friday label. Nevertheless, from the book's original publication in 1947,  it has had a tough go at remaining at the forefront of the reading public's mind.

Efforts by such discerning literary admirers as Raymond Chandler, who entreated his publisher, Hamish Hamilton, to bring Mrs. Holding's works to England, came to naught. Even laudatory reviews that appeared in respected periodicals such as The New Yorker, and the adaptation of The Blank Wall into two cinematic hits -- first The Reckless Moment in 1949 and then The Deep End in 2001 -- did little to keep this gem of psychological suspense from slipping the collective cultural memory.

A pity, as this wartime story of one woman's snap decision to conceal the body of a man who may or may not have been murdered by one of her family has a resonance one doesn't soon forget. Isn't it always the thing done on instinct, without a moment's thought, that causes one the most trouble to explain later?  Certainly that's the case for Lucia Holley, who is forced again and again to choose between the urge to protect her family and her own peace of mind.

Fortunately for us, those wonderfully intuitive editors at Persephone Books chose to republish The Blank Wall as Book No. 42, and the novel has been saved, in Miss Lemon's view, from obscurity. The publisher's note in the Persephone edition rightly points out that the acuity with which Holding depicts the psychological underpinnings of her characters' motivations sets the bar for the British masters of the genre who were to follow her: Celia Fremlin, Ruth Rendell, Margaret Yorke.

Indeed, Miss Lemon's readers who enjoy any or all of the aforementioned authors will most certainly enjoy The Blank Wall.
Posted by Elizabeth Frengel at 6:25 PM 2 comments: Links to this post

The Documents in the Case

If so, her faithful readers will not want to miss Dorothy L. Sayers's The Documents in the Case (1930) a marvel of a murder mystery told entirely in the correspondence and written statements of the key figures in the case.

George Harrison, a likable chap devoted to his family and his pastimes, is unceremoniously poisoned by a stew of amanita muscaria, a mushroom famous for its deadly venom. See the photo at right and beware not to mistake it for amanita rubescens, or the comparatively benign and edible 'warty caps.' 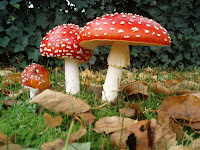 The hitch here is that Mr. Harrison was a seasoned gatherer and connoisseur of edible toadstools -- he even published a book on the topic and illustrated it himself. His son, Paul, finds it impossible to believe that his father would make such an amateurish mistake. So he collects the said documents and forwards them to Sir Gilbert Pugh at the Home Office. And thus an inventive and absorbing narrative unfolds, one that doubles as an armchair investigation.

Miss Lemon finds more than just the meta-form of this novel intriguing. Its creation is something of a curiosity, too. The copy Miss Lemon read, published by the New English Library in 1978, clearly names Robert Eustace as co-author. Yet many other editions -- and bibliographies of Sayers's work -- do not.

Eustace, the nom de plume of Eustace Robert Barton, a doctor and novelist in his own right, is credited by some sources with supplying Sayers with the central plot point and supporting medical and technical details that make The Documents in the Case such a marvel.  At the same time, those details are what sometimes interfered with Miss Lemon's willing suspension of disbelief. The technical whys and scientific wherefores are such that Miss Lemon found it hard to believe such minutia could be recalled in a letter or a written statement.  Unless, of course, the author was an inventive novelist himself.

How much of this work is Sayers's? And how much is Eustace's? Literary sleuths will enjoy puzzling out that question as much as they will the case of one very suspicious death.
Posted by Elizabeth Frengel at 5:23 PM 3 comments: Links to this post