A Pocket Full of Rye

Miss Lemon has just finished reading a delightfully chilling take on the old Mother Goose nursery rhyme, "Sing a Song of Sixpence." She's sure you remember how it goes:


Sing a song of sixpence,
A pocket full of rye.
Four and twenty blackbirds,
Baked in a pie.

When the pie was opened,
The birds began to sing;
Now wasn't that a dainty dish,
To set before the king?

In Agatha Christie's version, titled A Pocket Full of Rye and published in 1953, the dainty dish that's set before the king is a cup of poisoned tea. The king, in this case, is the financier Rex (she's sure the allusion won't escape you) Fortescue, and the poison is taxine, the byproduct of the leaves and berries of the yew tree.

As every bookish child knows, more verses follow the two quoted above, and Mrs. Christie, true to form, makes sure the trail of murder falls right in step with the rhyme, if not reason, of Mother Goose.

A Pocket Full of Rye is -- in Miss Lemon's estimation -- a neat and clever little mystery, made all the more intriguing by the rare appearance of Miss Marple outside the gates of St. Mary Mead. A personal involvement with the maid "hanging up the clothes" draws Miss Marple to Yewtree Lodge, trailing with her a fantastic string of village parallels which she uses to help Inspector Neele tie up this puzzling case.

Miss Lemon couldn't think of a cosier way to pass a rainy Sunday afternoon than with A Pocket Full of Rye.
Posted by Elizabeth Frengel at 7:37 AM No comments: Links to this post

Taken at the Flood

"In every club there is a club bore."

Has a truer or wittier opening line ever been written?

Indeed, she feels that one can find one of the cleverest beginnings of all time among the opening pages of Agatha Christie's 1948 detective novel, Taken at the Flood.

(Disclosure: Agatha Christie also created Miss Lemon; but she promises that this coincidence in no way influences her partiality.)

The fact is that from this rousing starter, the novel only gets better. The club bore in question is one Major Porter, late of the Indian Army. Mrs. Christie continues: Major Porter "rustled his newspaper and cleared his throat. Every one avoided his eye, but it was no use."

Ah, one can't help but feel the same sense of captivity -- the dread certainty that one will be regaled with a monologue of such colossal dullness that escape to quiet sanctuary becomes the impossible dream.

No one listens to Major Porter as he drones on about his neighbor, Gordon Cloade, blown to bits in an air raid, and the woman he'd married -- quite unexpectedly and late in life; no one cares.

'Got married while he was over there. A young widow -- young enough to be his daughter. Mrs. Underhay. As a matter of fact I knew her first husband out in Nigeria.'

Major Porter paused. Nobody displayed any interest or asked him to continue. Newspapers were held up sedulously in front of faces, but it took more than that to discourage Major Porter. He always had long histories to relate, mostly about people whom nobody knew.

No one seems to care, that is, except one M. Hercule Poirot, the sole auditor among this unwilling audience -- the only one who has the grey cells limber enough to perceive that the details of the saga being recited may one day prove significant.

And that's exactly what happens when the extended Cloade family, a breed of decaying gentility, find themselves embarrassingly dependent upon the new Mrs. Gordon Cloade, who survived the bombing.

When a stranger turns up in Warmsley Heath who might perhaps be the original Mr. Underhay -- and then is murdered -- there's plenty of motive and opportunity to go around. And plenty of skeletons that want airing from the family cupboard.

Miss Lemon thinks that Agatha Christie nears the height of her powers in Taken at the Flood -- with characterization, with verbal repartee, with setting and scene. This should also be counted among her most tightly plotted novels. Elements of disguise, mistaken identity and the frailty of first appearances add to the narrative intrigue.

There is a tide in the affairs of men
Which taken at the flood, leads on to fortune;
Omitted, all the voyage of their life
Is bound in shallows and in miseries.

A clever framework on Mrs. Christie's part, as the tragedy of the Cloade family begins to look quite Shakespearean indeed by the close of the novel.

Miss Lemon's only quarrel with Taken at the Flood is the final scene -- a superfluous resolution so sentimental that Miss Lemon shudders to recall it. But as it has nothing to do with the commission or solution of the crime, Miss Lemon can overlook it. She trusts the reader will do the same.

Now if you will please excuse Miss Lemon, she must get back to her filing.

A Library for Miss Lemon 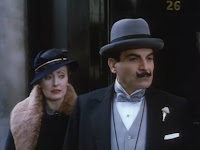 Were Miss Lemon, Agatha Christie's paragon of organization and efficiency, not employed as private secretary to two of the world's top detectives, one can't help but think that she'd make a librarian, nonpareil.

Even if her appearance is a bit severe, Miss Lemon's judgment is impeccable; her reason unshakable. What she may lack in imagination, she more than makes up for in exacting good sense. In short, Miss Lemon is a woman who errs almost never and who can be relied upon always. She's even set plans afoot to patent the perfect filing system.

Connoisseurs of crime fiction fist make Miss Felicity Lemon's acquaintance in Parker Pyne Investigates. But it's Hercule Poirot (that perennial student of human psychology) who sums her up so smartly in Hickory Dickory Dock: "She was never ill, never tired, never upset, never inaccurate. [...] She knew everything, she coped with everything."

Who better to turn to when one needs a good mystery recommendation?

But fiction being what it is -- and Agatha Christie's detective fiction, especially, being so unforgettable -- Miss Lemon will be forever fixed among the pages of Poirot's phone messages, client calling cards and case files and Mr. Parker Pyne's statistics. Even so, it's not difficult to imagine the library of crime fiction Miss Lemon would amass if given the proper resources.

Her first-hand experience with the masters of armchair detection has doubtless developed a palate for only the choicest whodunits, which she will periodically recommend in "Miss Lemon's Mysteries."

Occasionally, Miss Lemon may find it prudent to recommend books that are not technically crime fiction but yet are works that she feels possess such adequate intrigue or suspense to warrant notice in this column. We hope you can forgive Miss Lemon the occasional peccadillo. She's never really wrong, you see...

Next time, she promises to take on the work of her own creator in her review of Taken at the Flood (1948). Of course, if in the interim one feels the urge to read up on the redoubtable Miss Lemon herself, one should look no further than the above-mentioned Parker Pyne Investigates (1934) or the equally good Hickory Dickory Dock (1955). You'll also see her in Dead Man's Folly (1956) and the aptly-named Elephants Can Remember (1972).
Posted by Elizabeth Frengel at 8:30 AM 4 comments: Links to this post